Warning: mysqli_escape_string() expects exactly 2 parameters, 1 given in /home/customer/www/swspaceclub.com/public_html/wp-content/themes/desk-mess-mirrored/functions.php on line 2
 We Really Do Care – Mail-Away Guide

We Really Do Care

Kenner, was a company that seemed to really pride themselves on customer service. I’ve read countless stories where someone wrote into Kenner and received a response regarding their various questions or were sent freebies for unexpected delays in the various mail away promotions.

The most obvious way, in which they showed great customer service, was with their “We Really Do Care” service. Pretty much every Kenner toy had a little blurb near the bottom of the instruction sheet like this.

Basically, if a part was missing or had been lost, you could write to Kenner and they’d send you a replacement part if available, for free. I’ve read a few stories from people who participated in this first hand and happen to still have the mailer box/envelope they received along with the parts. However, they are sparse enough that they do not show up in the collector market often.

In this particular case, the person mailed away for some replacement X-Wing and Millennium Falcon parts. The envelope is postmarked, May 9th 1985, so this was closer to when the Star Wars toy line was winding down.

Kenner, sent out a sealed bag of X-Wing canons, a Battle Damaged X-wing canopy, and a Millennium Falcon turret. Also, included was an apology note stating that not all the requested parts were available because they were for toys not currently in production. 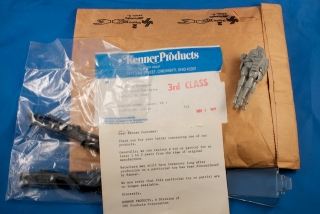 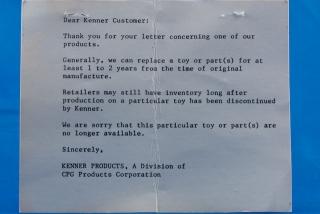 Here’s some other examples from other items that were sent in regards to this program. If anyone has some that they’d like to contribute, please sent them to mailerguide@powerofthetoys.com 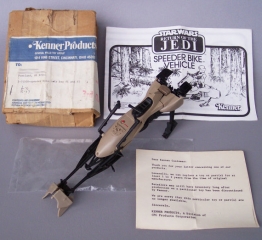