Until recently, it had been regarded that no one received the 2nd free figure in the promotion and no proof had existed. However, that changed in 2008 when some paperwork surfaced with similar graphics, a cardback and a letter from Kenner. The cardback proof of purchase had been blacked out with marker, making it so the consumer couldn’t use it in another mail in promotion or on the included rebate. 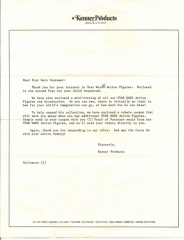 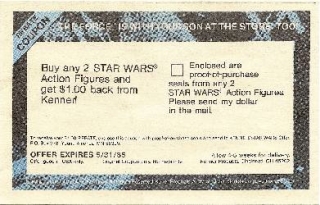 It wasn’t until June of 2011, that an entire followup mailer showed up on ebay, completing the story with an envelope, carded figure, and the same previously discovered paperwork. 2 years after that, a 2nd envelope was discovered by another collector. 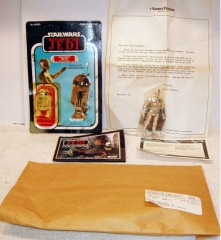 Several examples of each figure offered on the sticker sheet have been found with the marker on the POP and exhibit the typical wear of being sent through the mail. 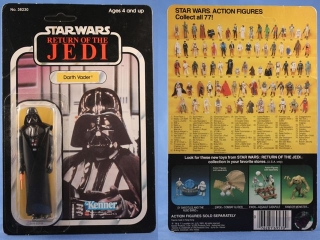 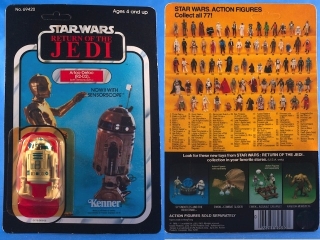 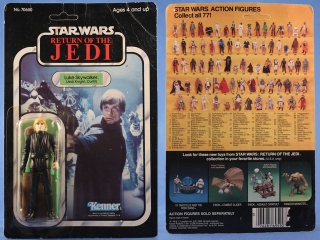 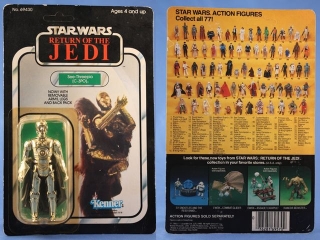 I was able to pick up most of these from the original owners, so I inquired to see if by chance they could remember where they got them from. Unfortunately, 20+ year memories are always vague, but here is what two of them had to say.

This makes perfect sense, although I was very young when my mom would have sent away for this offer, so I can’t know for sure. My mom always sent away for the special G.I. Joes, Star Wars, etc. Also, the Darth was with the Luke, so I bet the Darth was the send-away and the Luke was the bonus. That Luke is the only figure I had from the third movie, so it is possible that by the time my mom got it, I had moved on from Star Wars to something else, and she just stuck them in a drawer. Interesting, thanks!

I don’t remember how the offer originated. I do know that I saved points from purchasing Star Wars action figures, and that you could exchange the points for more toys through the mail. I know that I took advantage of those offers. I am not sure if this particular toy was from collecting those Star Wars points. Whatever the original offer was, I think that if you responded to it you recieved the figurine and the letter with the stickers on it and could choose another toy. But I’m not 100% on that. I know that I had a couple of the original offers, because I got more than 1 figurine – I got 2 Lukes and the C3PO. I think my grandfather helped me get the original offers. All I remember about receiving them is that they came in the mail in a small plain box. As an 11 year old I wasn’t paying attention to some of these details, but I did think it would be cool to save the unopened toy and the stickers to have when I was older. Only now do I realize how cool the letter itself is. 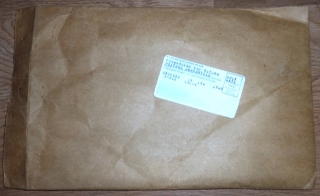 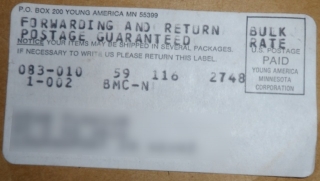