The Imperial Stormtrooper in Hoth Battle Gear was only seen on screen for a few seconds, but has become a cult character for many.

Kenner chose an asthetically pleasing image of the Hoth Stormtrooper for the cardback packaging which shows him standing in, what I assume is, the Rebel base.  The unobstructed image shows a second stormtrooper in the background which is virtually hidden by the bubble/figure area on the finished cardbacks.  A third stormtrooper can also be seen behind the main stormtrooper. 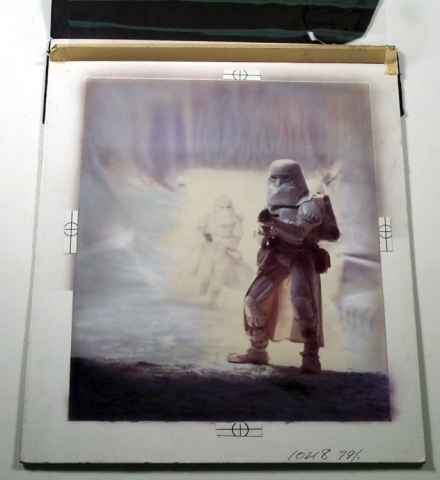 Initially the photo does not seem to have been altered.  However, closer inspection reveals that this isnt the case as the image has been extensively airbrushed.  The background has been darkened (you can see the original colour around the Stormtroopers) and texture has been added or highlighted.  The shadowed floor area has also been darkened.