FX-who?  Where was he in the film?  Is he a Darlek?  Kenner didn’t seem to know, so chose a generic image of everybody’s favourite space doctor, likely from Lucasfilm, rather than a still from the film.  Not that it matters because the image was extensively, and expertly, enhanced! 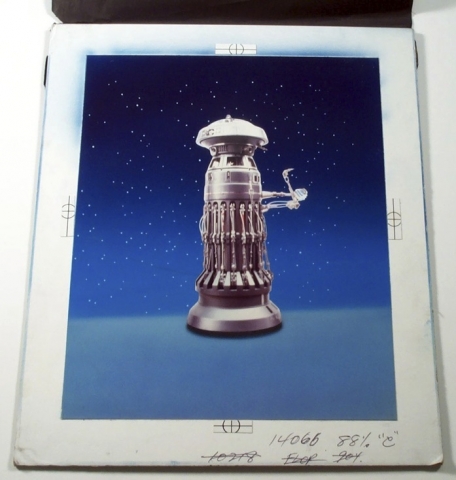 The image has been enhanced in several ways.  Firstly a deep blue space background has been added and secondly, the base of FX-7 appears to have been airbrushed, to add reflections and a shadow.  Interestingly there is a lack of ‘overspray’ around the photograph which may mean the photo came from Lucasfilm already with the background added – or it was airbrushed then mounted to this backing.

The image is the reverse to that which was used on the Kenner cardback but corresponds with the TriLogo card design.  It may be that this photoart was used by both and simple reversed by Kenner, or was purely for the TriLogo cards.