The image of Chewbacca (and Han Solo) blasting their way out of Mos Eisley became the cardback image until the later Jedi cards when a more friendly looking Chewbacca on Endor was used. 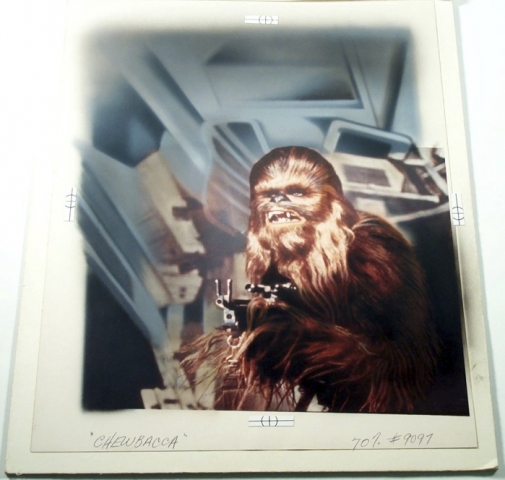 At a first glance, the photo does not seem to have been altered which is a testament to the skill of the airbrush artists at Kenner.  However, closer inspection reveals that the photo has been extensively altered.  The background has been extensively altered and ‘softened’ to ensure the image of Chewbacca stands out.  The level of airbrushing has rendered the background virtually unrecognisable, while keeping Chewbacca prominent and true to his film likeness.

The photoart really does keep on producing interesting conversation points.  It has been pointed out that Chewbacca’s bowcaster has been partially airbrushed to remove the crossbow ‘arms’, which was so the packaging photo more closely represented the toy.