The original Boba Fett photo survived until the late ROTJ release when it was revised to the picture you see below, set on Tatooine as Boba Fett battles with the escaping rebels.  The photo shows Fett in an action packed pose and is an actual photo as opposed to the previous picture which was a painting of the character.

Had the POTF line continued, the Tatooine photo would have been used, as a cromalin which surfaced proved. 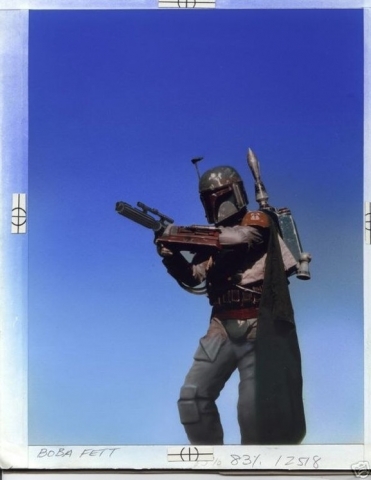 The photo does not appear to have been altered in any way other than to accentuate the blue of the sky, and to possibly remove unwanted background elements.  However, the skill of the airbrush artist once again becomes apparent when you look at Fett’s legs.  The legs and lower part of the cape seem to be extensively airbrushed.