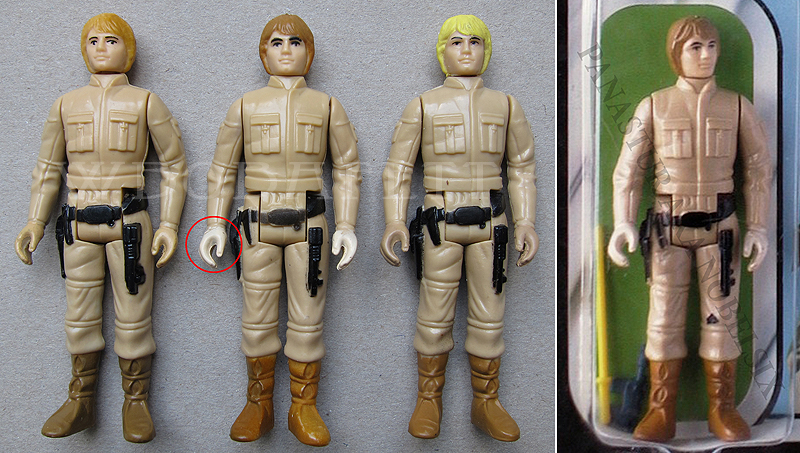 The figure shown in the middle above is one of the known Poch Luke Bespin variants. Next to him shown are his COO counterparts from Kenner. I don’t have a brown haired Kenner one with this specific COO nor have I heard from one existing. The picture from J.C.‘s carded one shows exactly all the significant characteristics, so to me this one is confirmed. You can see the true black fat eyes and the very pale hands which are most significant. Indeed this is the only known Luke Bespin with brown hair and true black eyes (besides the Ledy one). If you look really close on the carded one you can even see the same irregularities on the boots from the sloppy executed sprayjob.

On the right you can see the COO belonging to this Poch version.
The way the boots are sprayed is very significant. The color can look totally different in certain areas depending on how thick or thin the paint was applied. This phenomenon can be seen on other Poch variants too (see for example Luke Farmboy). 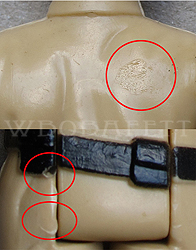 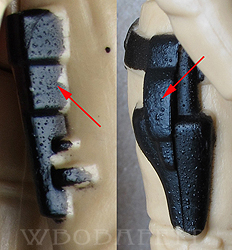 On the left you can see the melt marks on the torso’s back and on the hip from the left leg. A second example was found recently by Kenneth_B and I hope to provide pictures soon.

On the right you can see two details of the „dripped“ paint. We can see that all Poch identification points are given here: melt marks, sloppy spray job, pale hands and “dripped” paint. 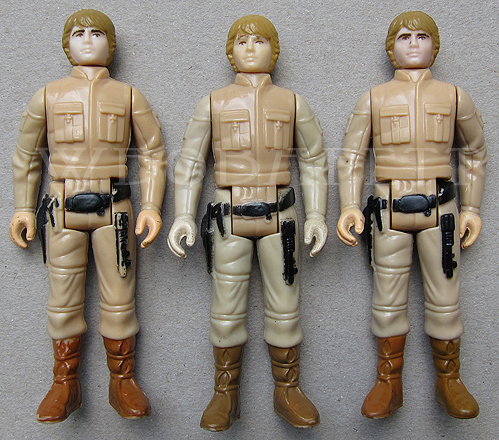 The figure shown in the middle is the other POCH version known to Luke Bespin. It was originally discovered by JaviSWSpain: Poch Luke Bespin. Why there is another version with different COO and totally different characteristics is unclear. Hopefully a carded one will show up soon and confirm the existence of both versions.
The pale hands, the unpainted hip on the right, the paler limbs and the very light sprayed eyes and brows seem to be typical for this variant. If you follow the link above you will also see some good shots of the melt marks made by JaviSWSpain. It’s a real pity mine doesn’t have such clear marks, but it’s the same figure overall. 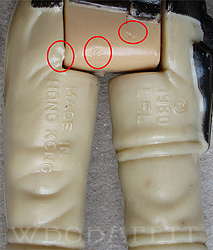 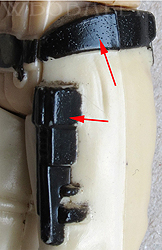 To the left you can see the COO from this Poch variant. It’s indeed another COO compared to the Poch Luke Bespin variant mentioned on top of that page. You can also see some tiny melt marks on this picture but I think the one from JaviSWSpain shows this much better.

To the right the „dripped“ paint is pictured. Although there is another Luke Bespin version confirmed to Poch, I have no doubt this one is Poch too.