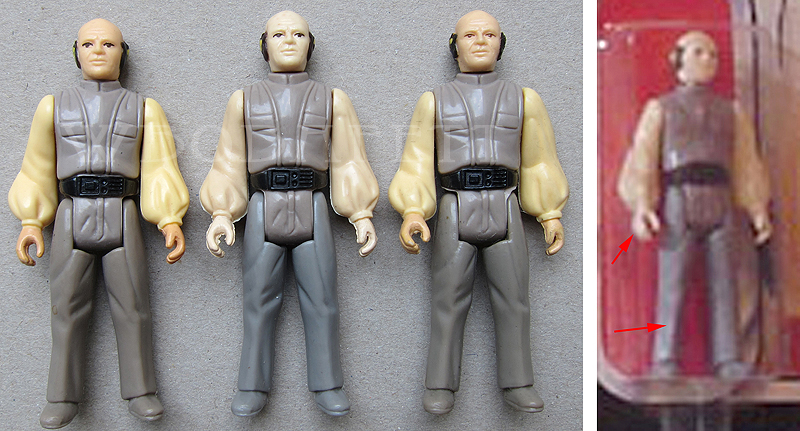 The figure shown in the middle above is assumed to be the Poch version of the Lobot. Shown next to him is the COO counterpart from Kenner to the right and the related „no COO“ to the left. As you can see the Poch one has the eyes sprayed like the no COO. There are also other Poch examples known with the eyes sprayed like the HK counterpart (see below). It seems that in the Poch period again spray masks or overstock parts from Asian producers got mixed in with own figures. The carded one shows similar characteristics such as pale hands and different colored legs. 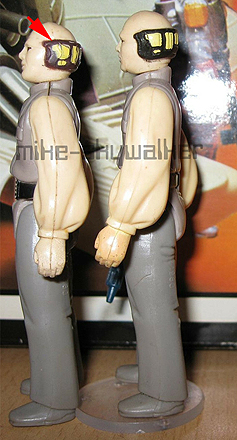 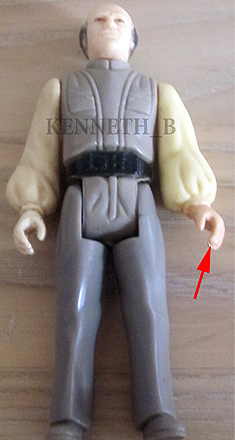 Shown to the left is the example Mike_Skywalker found. This was the first one spotted that I know of. In the flashlight you can see very well how reddish the borg construct can look on the POCH version.

The next Lobot to the right was found by Kenneth_B. This is the example with the different spray mask used for the facial details. In addition it also has a Kenner (overstock) left arm. We noticed on other figures as well that this can happen, because Poch/PBP seem to also have used some painted overstock parts from Asian factories. 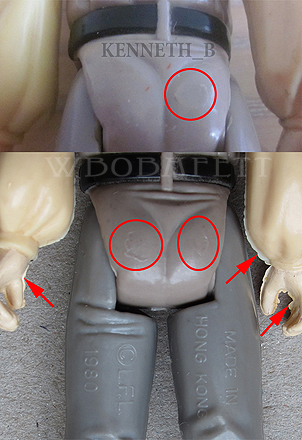 Above you can see a comparison shot from all three Lobots shown in the first picture. The borg construct is far more reddish on the Poch version compared to the ones from Kenner.

Shown to the left are the melt marks on this figure. You can also see some kind of “flashing” to the arms. The ridge on the arms shows how poor quality on those can be. Also shown is one of the COO’s known to this figure. I tend to believe that other COO’s found on Poch Lobots are more likely figures that got mixed up with overstock parts during production.