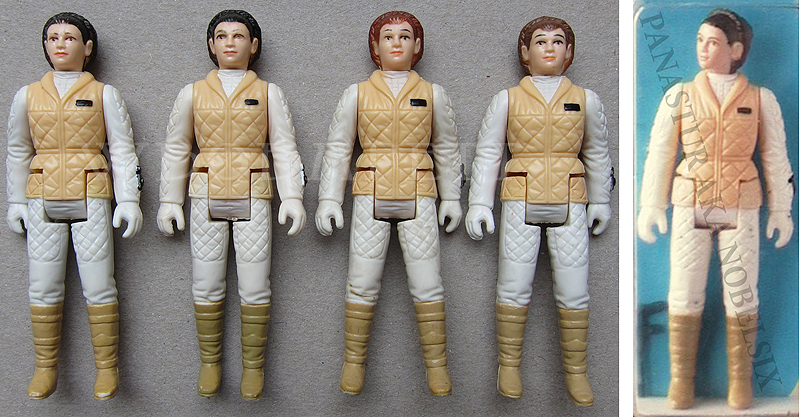 The second figure from the left in the picture above is assumed to be the Poch version of Leia Hoth. Shown next to this variant are the Kenner counterparts with all different kind of hair colors known to exist. The carded one shown belongs to J.C. and I hope to get a clearer picture soon to confirm this Poch variant. The main characteristics are the greenish eyebrows, the smaller painted emblem and the darker boots (although the picture doesn’t show that very well). The boot color is similar to the one applied on the Poch Luke Farmboy. On both figures this color can differ heavily in its shades.

Shown to the left are the facial details. They differ slightly from all Kenner versions in its color. Most significant seem to be the greenish eyebrows. Very strange indeed, but I have seen this on two examples now (on the third the eyebrows were gone). To the right you can see a typical PBP looking sprayjob on the hip. The color seems to be the same as used for painting the pale hands and some pale faces.

Shown to the left is the COO belonging to this variant. To the right you can see that this Poch variant also has the typical melt marks from kind of a tool during assembly. Some are more significant, some are less. Of course this area is kind of extended and is often damaged, but if you have a look on mainly the third picture I think you can see this is rather from a tool then a playwear. If you compare the location of the dents with the first picture you will also recognize that these marks follow some kind of pattern.