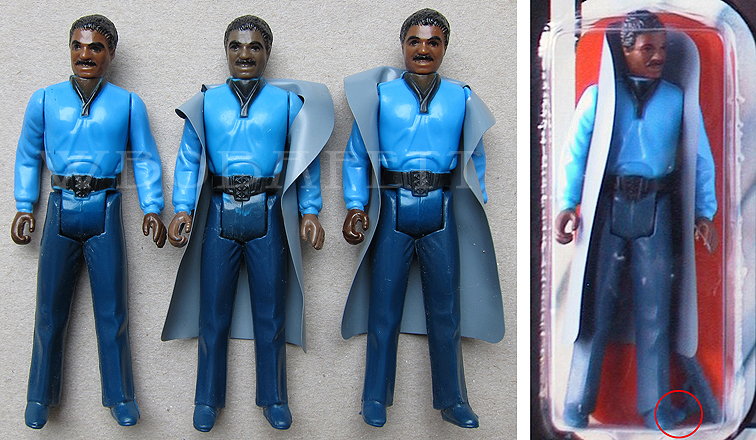 The figure shown in the middle above is the so called Poch „black neck“ Lando. Next to him shown are its COO counterparts from Kenner. The carded one shown to the right confirms this variant being Poch. This figure exists with no white paint („no smile“) and with white paint applied („smile“) to the head (see picture below). Both versions have a true black neck and a blue border left on top of the neck. What you can also see is that the hands on both Poch versions are quite lighter painted compared to the Kenner pendants. 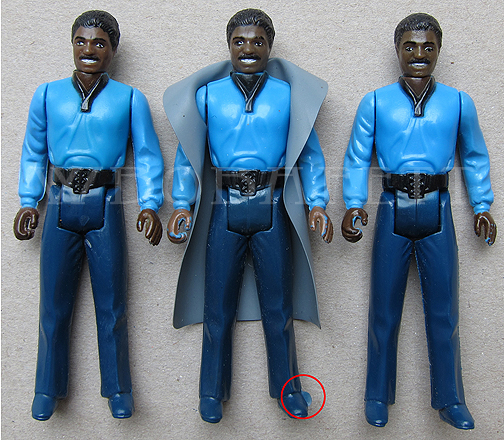 This black neck Lando with “smile” has a huge ridge left from production on its right foot. This can also be seen on the MOC shown above and I saw this appear on some other examples too. It’s not a must of course but it seems to occur often on this variant. 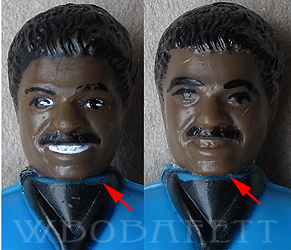 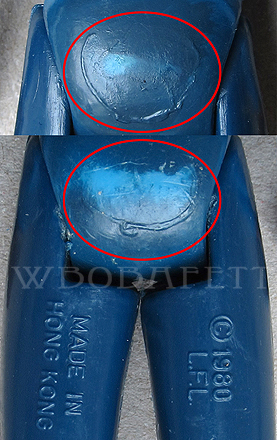 Some details from the face are shown to the left. The paint-scheme on the beard can quite vary, especially on the ones without “smile”. Important is the blue border on top of the black neck (see arrow). This is an easy way to spot fakes or factory errors from Kenner with missing or very less sprayed brown.

On the comparison shot to the right you can see the typical marks on the Poch Lando’s “tushy”. It’s not only that the color is rubbed of (what can also happen later), it’s more that the color was pressed hard and formed kind of an „embossed“ circle. The COO shown here seems to be typical for the Poch Lando. Have in mind there is four nearly equal COO’s from that kind known. All four can probably appear on this one.

To complete this article about the Poch Lando Bespin it should be noted that there are also “brown neck” Landos known. The consistency in production isn’t that good in the Poch/PBP factory, as already stated before.