The dilemma with the “POCH” variants is, that there is lots of different versions on each of the characters floating around. As already mentioned it can be assumed that Asian overstock parts were mixed-up in the own production in the Spanish factories.

This assumption is difficult to proof for sure, but I will give an example on a more known figure: The Rebel Soldier.

This Poch variant is one of the most earliest known ones. The white painted trousers makes it unique compared to all other produced Rebel Soldiers worldwide. It is also one of the more comon ones that can be found more easy from time to time.

I have found a few of those over the years but never payed attention to possible mixed-up parts and passed them along. Then I came across a figure that had the torso from a Poch version, but different, molded legs and different Coo. I kept it for interest and came across one more mixed-up figure as well as another un-mixed-up one. So I have now four POCH Rebel Soldiers that can be compared next to each other. I will now write down my observations.

First up is a picture of the four POCH Rebel Soldiers: 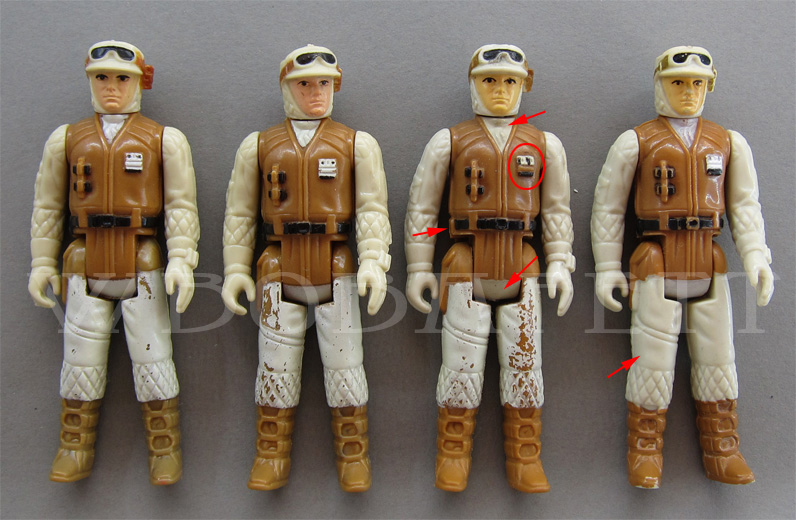 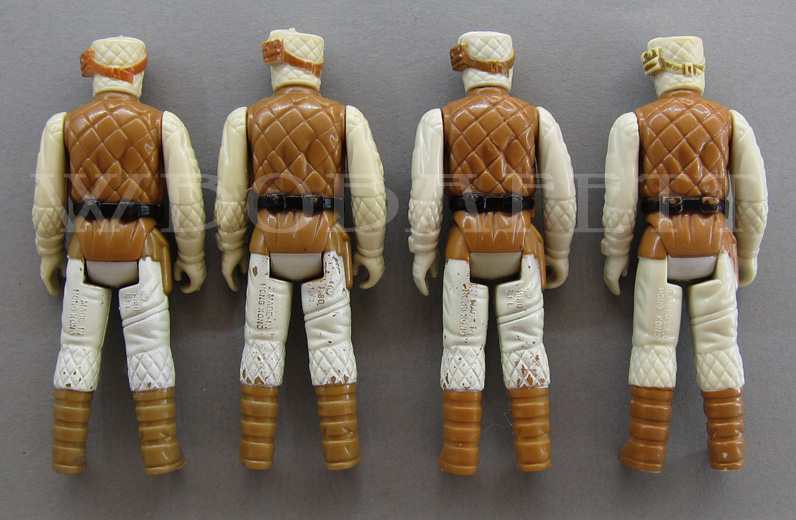 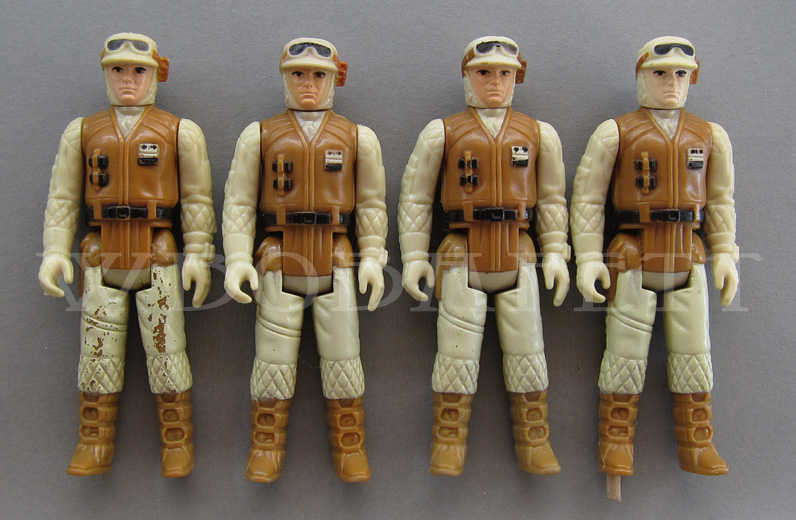 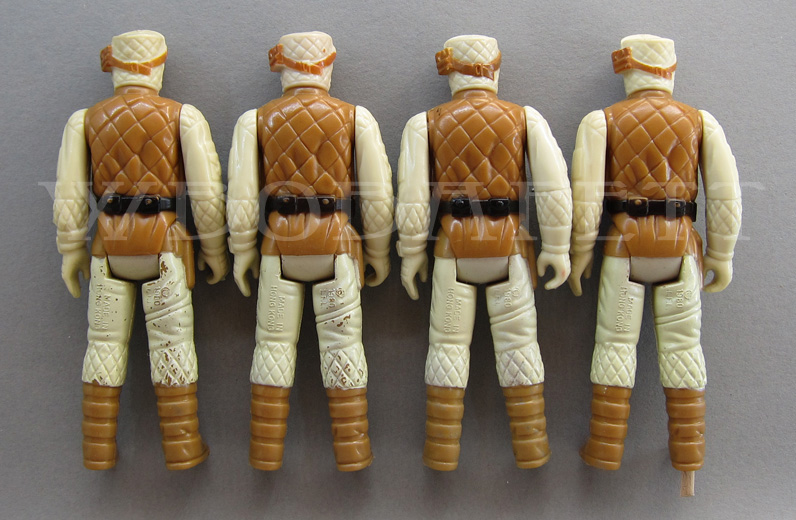 Third for comparison is the 2-line HK. This figure is assumed to be Asian overstock that got mixed-up in the Spanish factories: 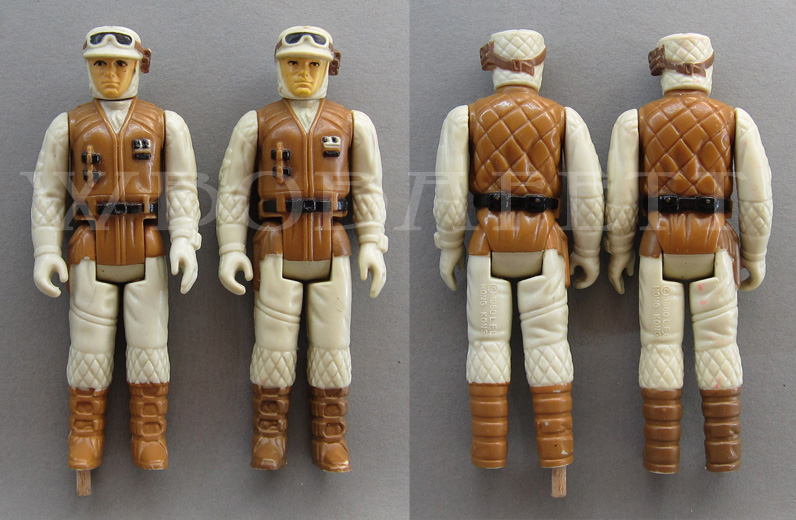 We have now seen different versions of the POCH Rebel Soldier and for comparison a bunch of the similar MIHK ones prodcued by Kenner as well as another Coo (1-line HK large) with molded pants prodcued by Kenner.
In fact every Coo-family has its unique mold to the arms,legs, head and the torso. If you study them well you will surely notice differences on those parts. This knowledge gives us the opportunity to compare single parts i.e. one arm to another.
I have now closley inspected all four POCH versions and compared them to the Kenner molds. The paint job already gives us good hints but I wanted to be sure and inspected even the obvious parts to find mold differences and sort them.
I have called the “1-line large HK” the “A” mold and the “MIHK” the “B” mold: 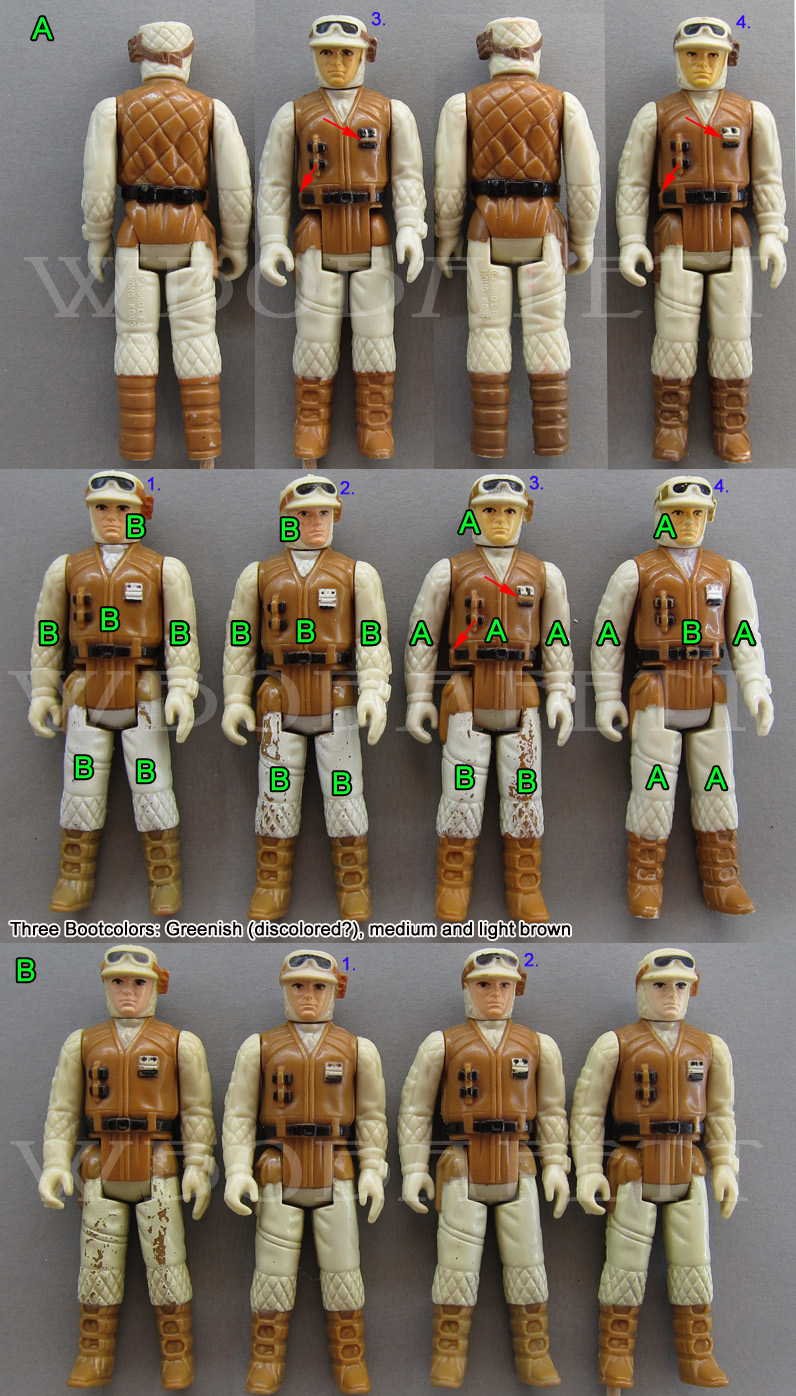 In addition I tried to sort the used heads on the Poch figures and tried to relate them to the Kenner ones (1,2,3,4). You can find, despite discoloration on POCH head 4 (paint:faded face and greenish strap) and maybe also a tiny bit on 3 (paint:faded face), very similar heads on Kenner versions.
We can see now that some of the parts are a total match compared to the Kenner ones: Same mold, same colors. The used parts of the “A” mold are IMO already painted and mixed-up parts from Asian overstock. It also wouldn’t make sense to paint those parts totally different and more Kenner like, whereas other parts were always painted different. The “B” parts seem to be all painted in the Spanish factories.

This is only one example of quite a few now that I have investigated. To me it is clear that POCH used and also mixed-up Asian overstock parts that were already painted. This explains the whole varity of Poch variants within the same character. We have at minimum two different heads on all POCH variants, some of those are already in the guide:
Luke Bespin
Bespin Security Guard
Lando
Rebel Commander
etc.

In my opinion it is time to get things sorted and try to locate the true and un-mixed-up POCH variants. Or do we call every figure “POCH” that was simply “only assembled” in those Spanish factories? Another question I would like to bring up is the heads: There is very less really unique heads to the known Poch variants. We have i.e. Lando with black neck, but the faces seem to be an exact match to the Kenner counterparts, same on many other figures. Maybe some figures even do not exist completely painted in the Spanish factories?? Maybe we have to live with some of those as “just” beeing mixed-up??
What makes this even harder is the assumption that there were also unpainted Asian overstock parts used, but that will be maybe a subject for another small article.

Next: Overview with linked guides to known Poch figures