You have to love this little R2-D2 knock-off produced by Geobra Brandstätter/Playmobil in 1980. 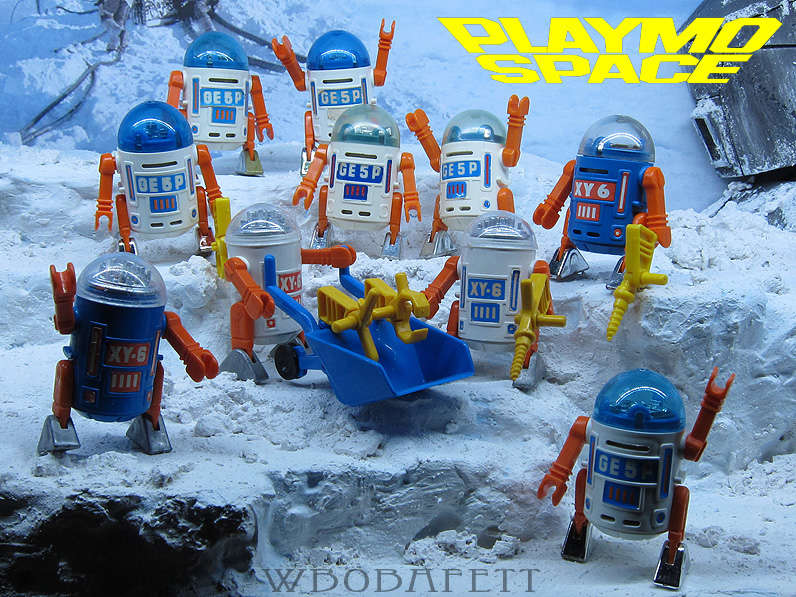 For the Playmospace line this robot was produced in several countries from several factories. Thanks to Walkie (Stef) we know that the Playmobil figures were produced by TROL in Brazil, Estrella in Brazil, Antex in Argentina, Famosa in Spain, Lyra in Greek, Mattel in the USA and of course by Geobra Brandstätter in Germany. So we can find several variations on mold, stickers and colors. It has become a little army by now, but there is still some missing.
Say hi to the gang:

I try to roughly show and name the main differences (this is no guide….I just have too less time left and I am pretty sure Walkie will do way better anyway 😉 ): 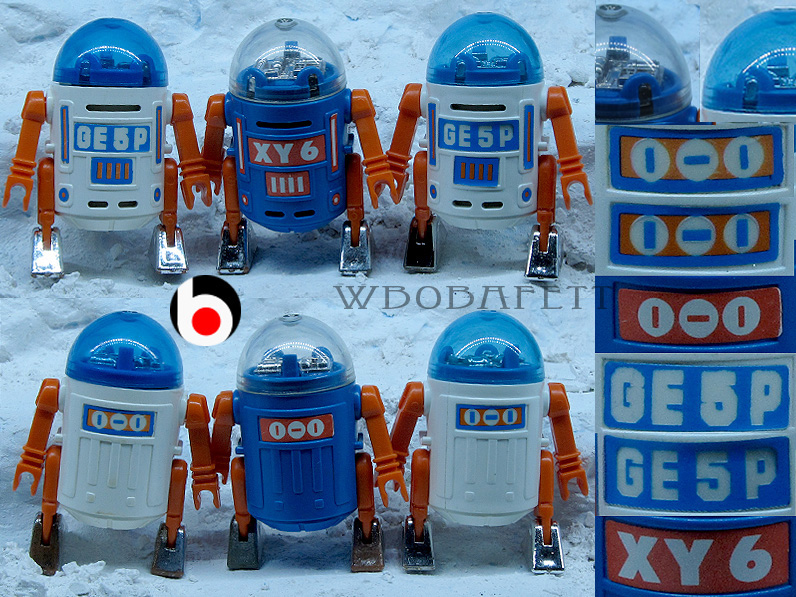 There is roughly three main variants on the robot produced in Germany (Geobra Brandstätter). They can be found everwhere around Europe.
– They all have chromed feet
– There is three different domes (lightblue, darkblue and clear) and two different colors to the torso (white and blue).
– The blue “XY 6” one seems to be never released in a package. It is said it was a promotional give-away in 1980 and therefore it is pretty rare and pretty unique overall.

The two white ones are clearly different.
– The plastic to the arms is different (cannot be seen well in the pic, but the one to the left has lighter orange arms and legs)
– The domes are different (light and darkblue)
– The stickers are different cut. They differ heavily in size.
– The typo “GE 5P” is different. One is more precise and smaller, plus slightly different typo/letters.
– The orange to the stickers differ (light and dark orange)
– The blue stripes in the circles to the back are printed different. Whereas one has white printed below, the other one is printed only blue on the see-through area.

I have seen of few of each so I am pretty sure these are legit variants as shown.

Edit: I forgot to tell that one of the “German” white ones is possibly the YPS version. As far as I have seen some pics I would say the one with the darkblue dome and the larger typo, but till now just a guess. 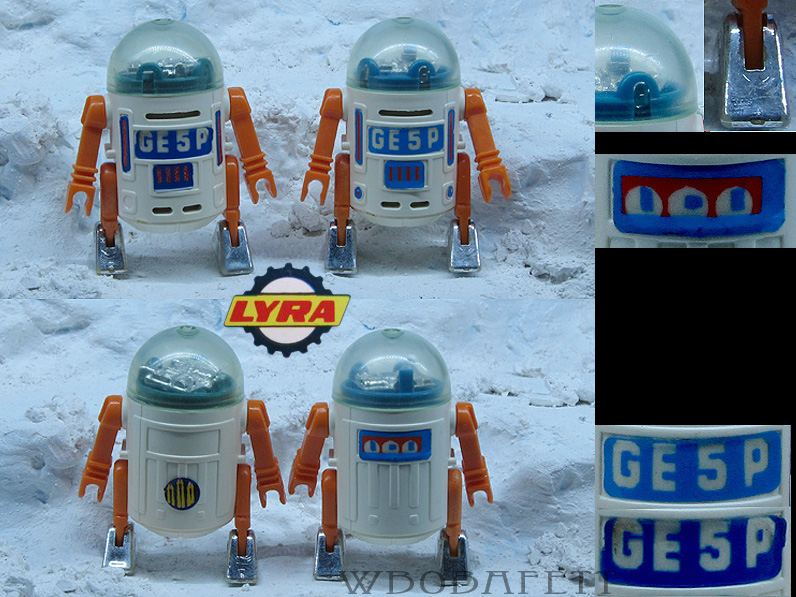 Shown above are the Lyra ones made in Greek. The unique features are:
– They all have the clear dome combined with the white torso!
– The stickers are very glossy. The cut, size and the print is very different compared to the German ones.
– There is two different stickers known: very light and very darkblue. They are combined with red (not orange).
– The plastic to the arms and legs is very pale. 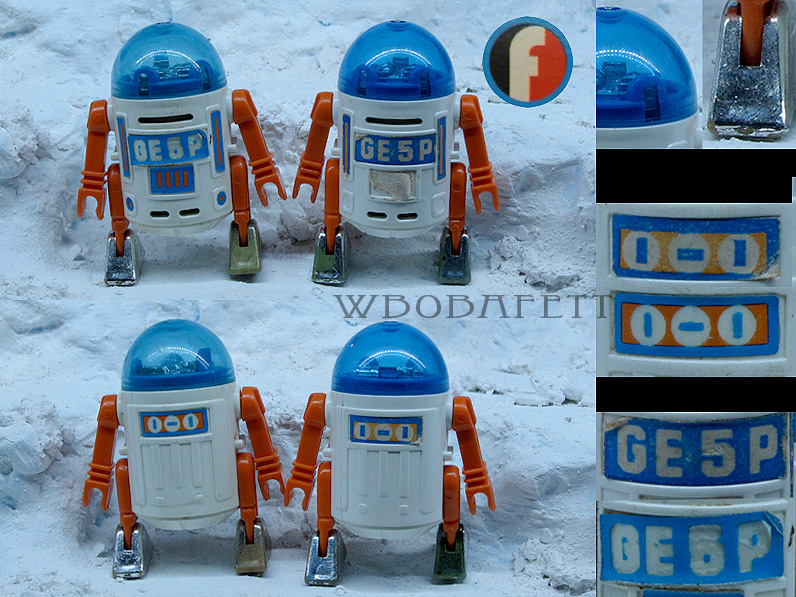 Shown above are two variants that appear in Spain produced by Famosa. The unique features are:
– The plastic overall is “harder” similar to the PBP produced Star Wars figures.
– The stickers are again different to the German ones. The left one is very close, but slightly different (cut and print)
– The stickers to the right are extraordinary: The white areas are not “see-through”. All other “GE 5P” stickers are see-through, while this one is printed on white paper. You can see this on the sticker to the front (letters) and back (circles).I have seen three by now but all were incomplete. I hope to find one with all stickers still attached in future. 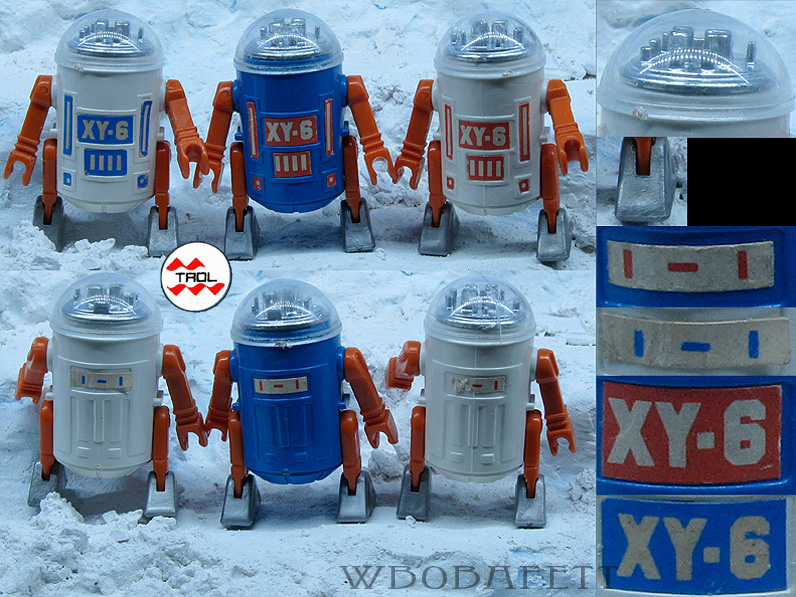 I will hoepfully have some time to inspect and research more on the accessories, because I already noticed there is also huge differences.

And last but not least the Playmobil “3318” robot on wheels.
Okay…it has nothing to do with Star Wars at all, but well, I can’t help looking for variants: